Daniel Defoe was kind of whacky.  I didn’t know him personally, but considered from our current perception of literary genre and journalistic integrity (not that I think journalistic integrity is a thing that exists) he was wild and crazy.  In the early 1720s Defoe wrote a book about the Great Plague outbreak of 1665.  He published it under the initials H.F. and claimed that it was written just after the outbreak.  The narrator is a grown man who stayed in London for the duration of the “visitation.”  Defoe himself was five years old in 1665 and fled to the countryside with his family.  See what he did there?  He published a historical novel and claimed it was non-fiction.  Sound familiar?  Are you outraged?

I have always thought readers these days are too hung up on what things are “true” or “real” and what things are “fiction.”  I heard Tim O’Brien read at Arlington Public Library.  He said he is confused by all the people who ask him which parts of The Things They Carried are true.  Yes, the book is about Vietnam.  Yes, he was there.  But it’s all fiction and he says it is closer to the “truth” about his experience in Vietnam than any factual account could approach.  Fear and Loathing in Las Vegas is published as non-fiction these days.  There is exactly a 0% chance that the events of that book happened just the way Thompson described them.  However the speech about the wave, you know, the one that starts with “San Francisco in the middle sixties was a very special time and place to be a part of. Maybe it meant something. Maybe not, in the long run… but no explanation, no mix of words or music or memories can touch that sense of knowing that you were there and alive in that corner of time and the world. Whatever it meant.…’ has got to be the truth, as he felt it.  It gives you more “truth” about that generation and that place than any doctoral thesis on the counter culture in the ‘60s could, in my humble opinion.

Swinging back around from my tangent, Journal of the Plague Year does contain plenty of facts and statistics (“But, Sydney, statistics hadn’t been invented in 1722.” I know, shut up.) about the Great Plague in London.  Defoe lists the number of people that died in each borough during each week of the plague.  He peppers in incidents from H.D.’s personal experiences.  Overall, he creates a very detailed if somewhat fictional account of the lives of the people of London during the “distemper.”  I know what you’re thinking: that sounds really boring.  You’re right.  This book was boring.  Fortunately for you I am going to tell you all the most exciting tidbits.

·         To ward off plague write this symbol on a piece of cloth and pin it to your clothes:

Congratulations!  You are now plague proof.

Yeah, that’s right, I made it to 27 without reading Robinson Crusoe.  Generally, I’m not drawn to novels with no female characters.  Despite its fame, I didn’t know much about this book going in.  I didn’t know that Crusoe is marooned more than once and I was shocked by the boldly racist and colonial attitudes portrayed in the novel.  It’s as if Defoe is so certain of the superiority of British nobility that he thinks natives of other countries are just sitting around hoping that a glorious white nobleman will show up so they can serve him forever.  Who doesn’t dream of a life of servitude?

First the rudiments of the plot, Crusoe starts out as a headstrong youth, determined to go to sea despite the tearful pleas of his father who begs him not to forsake his easy middleclass setup in England.  Regardless, he sets sail on a ship that gets attacked and captured by a “Turkish rover of Sallee.”  Crusoe’s captors sell him into slavery.  He contrives to escape and takes a Moorish boy, Xury, with him as he can’t sail his escape vessel all by himself.  Xury is a charming companion who helps Crusoe remain safe and fed until a Portuguese ship picks them up.  Crusoe then sells Xury to the Portuguese captain!  He feels conflicted, “not that I was not willing to let the captain have him, but I was very loath to sell my poor boy’s liberty, who had assisted me so faithfully in procuring my own,” but the captain offers to “set him free in ten years, if he turned Christian.  Upon this, and Xury saying he was willing to go to him, I let the captain have him.”  Ugh.  I don’t feel that I even need to go into how horrible that is.

Crusoe ends up in Brasil, where he starts a plantation.  He has a nice thing going for him, but feels that seafaring itch again and, seeking cheap labor, sets off for Africa to capture some slaves.  That’s right folks, the ship that wrecked and marooned Robinson Crusoe was a slave ship.  I didn’t know that.  Seems like a significant detail that should get more attention, huh?  They certainly changed it for the Pierce Brosnan movie.   So, the slave ship wrecks and Crusoe is the only survivor. He lives on that island for 28 years.  No joke.

The meat of the narrative consists of detailed description of our leading man’s efforts to build and fortify his shelters; hunt, gather and eventually farm.  We also, of course, get frequent updates on his emotional state featuring plenty of fear, loneliness, paranoia, pride in his ability to provide for himself, newfound religious faith, acceptance, contentment and gratitude.  A bumpy ride that leads to some wise-sounding philosophical ruminations on the value of having everything you could want and no possibility of gaining anything further.  Crusoe decides it’s desire and reaching for more than you have or need that lead to evil.  Pause and ruminate on Capitalism if you wish. 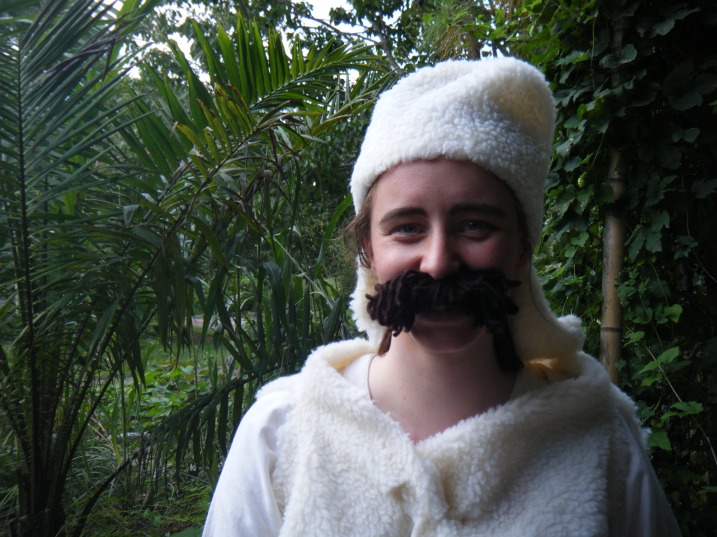 Crusoe lives in solitude for many years before Friday arrives.  For the sake of those who haven’t read it, I won’t relate the most exciting event in the story.  I’ll just say that Crusoe saves Friday from very imminent danger and let Crusoe tell you the rest: “At length he came close to me, and then he kneeled down again, kissed the ground, and laid his head upon the ground, and taking me by the foot, set my foot upon his head.  This, it seems, was in token of swearing to be my slave forever.”  Come on, Friday, there are two people on this island, there is no need to give up the power struggle so quickly or so thoroughly.  Yes, Crusoe saved Friday’s life and has scary guns, but seriously, he did not need to do that.  I guess the idea of a white man and a “savage” being friends, companions and—God forbid—equals would never have occurred to Defoe.  However, it seems to me that companionship is exactly what Crusoe would be wanting at this moment.  Also, I would think that the complete subjugation of another person is only possible when you have the muscle to reinforce it, which comes not only through superior arms, but by having a social system in place that supports the subjugators.  I find it inconceivable for two entirely isolated people to live as master and slave.  However, the way Defoe writes it, Friday immediately begins laboring to ensure their mutual safety while Crusoe sits back and watches.  Ugh.

Defoe does try to make Friday out to be a lovable savage.  He is energetic, athletic and friendly.  Not to mention “the colour of his skin was not quite black, but very tawny, and yet not of an ugly yellow nauseous tawny, as the Brasilians and Virginians, and other natives of America are, but of a bright kind of dun olive colour, that had in it something very agreeable, though not very easy to describe.”  Apparently, the skin color of Native Americans makes Robinson Crusoe feel like he is going to barf.  Do you kind of wish he had died slowly of malaria?  He converts Friday to Christianity, but mentions that even though he had not the advantage of a Bible, he was way better at Christianity than any of Crusoe’s English buddies.   In other words, he was already a good person without Christianity while many Christians were not such compassionate people.  I have to admit, I skipped approximately three pages of Crusoe converting Friday, because the concept of converting the heathen makes my skin crawl.

Now I have gone on too long about Robinson Crusoe.  I have much more to say about Daniel Defoe and his style and contribution to literature, but I’ll leave that for the next post on Journal of the Plague Year.

Final thoughts: I think Crusoe’s emotional development as he reacts to his isolation on the island is the most compelling element of the story.  I can see how people might enjoy reading about his home improvement projects, basket weaving and making a grindstone for example.  I have no beef with Defoe’s writing style.  He can compose a compelling sentence.  However, if you are seeking entertainment, the book is too long and the plot points too far between. 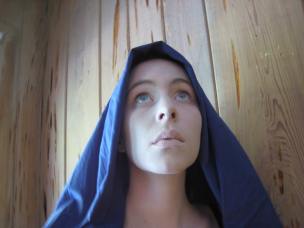 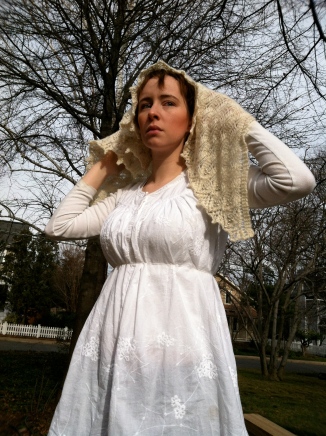 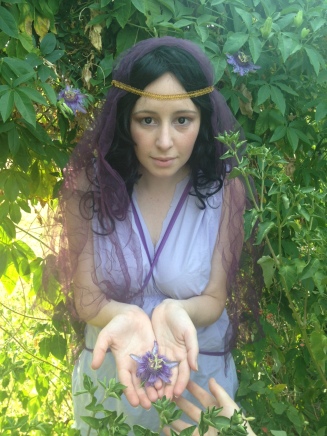 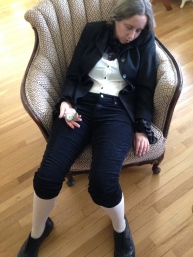 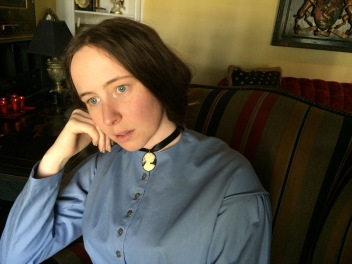 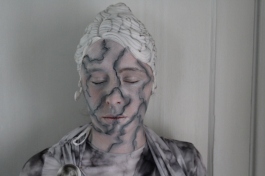 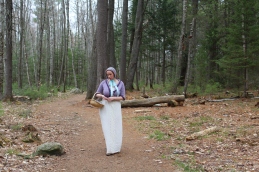 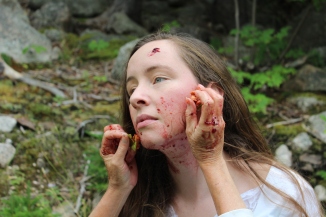 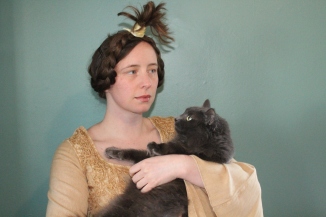 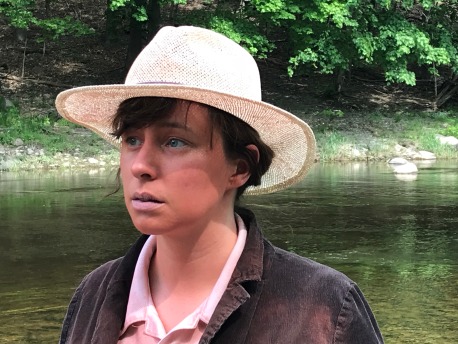 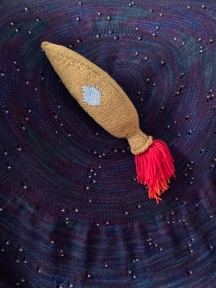 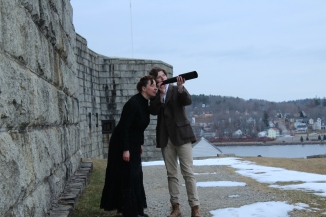